This post is part of a series published as part of the University of Southampton’s Living and Working on the Web module. To find out more, including links to all of this year’s student blogs, check out the UOSM2008 website.

Task: Evaluate the impact of your “Digital Differences” on how you interact with the Web.

My experiences of digital differences

When we got our first computer, my grandma and I learned digital skills together, despite a 50-year age gap. Now, over a decade later, there are certainly some similarities in how we use the Web – we both play games, get news alerts, and communicate via iMessage and FaceTime. However, my work and studies lean on desktop modes rather than her mobile/tablet preferences, and both for social and security reasons she has long refused to put personal or financial information online.

Whilst the Web utopia promises equality and opportunity for all, to achieve this we must address two interlinked areas of difference: access and skills. Previously we discussed how Marc Prensky’s (2001) concepts tied the latter to age, with digital natives’ early immersion in technology providing intrinsic understanding. Stating the need for networks to reach a “critical mass,” whereby usage is widespread beyond technically-adept early adopters and thus is beneficial for broader society, Jan van Dijk (2013) builds on this by placing users into concentric tiers. 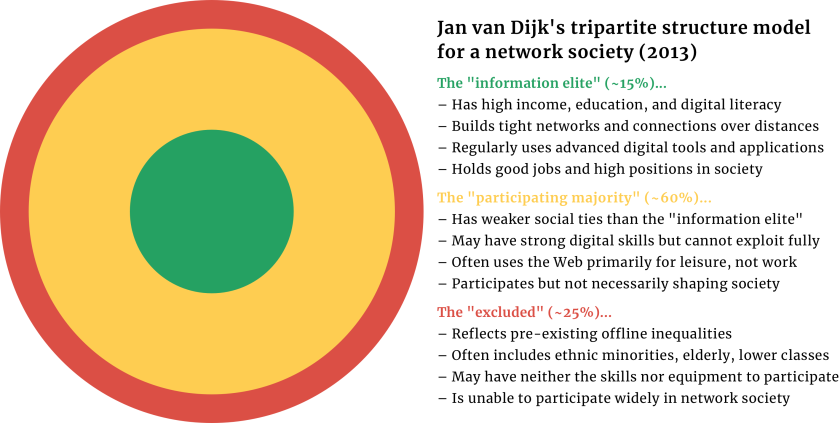 Globally, van Dijk’s proportions are reflected in ITU (2017) figures. Although all but four nations show a year-on-year increase in Web penetration, this figure remains under 25% in 47 nations. Further ITU data (2017) illustrates divides in age and gender in online populations, however growth is evident in mobile and fixed broadband connections in developing regions.

Technologies will naturally be built according to the perceived needs of their users, and if these are primarily towards the centre of this structure, the disparities run the risk of growing ever greater. Gerd Paul & Christian Stegbauer (2005) demonstrate this by looking at the usage and requirements of Germany’s elderly population, concluding that these users require simpler solutions than their younger counterparts and that individual gains from Web adoption can effect non-users detrimentally. Additionally, efforts to spread computing and connectivity have faced criticism for their shortsighted approaches, and discrimination proliferates (e.g. Lisa Nakamura, 2011).

I write words. Sometimes say them on the radio too. View all posts by Xavier Voigt-Hill