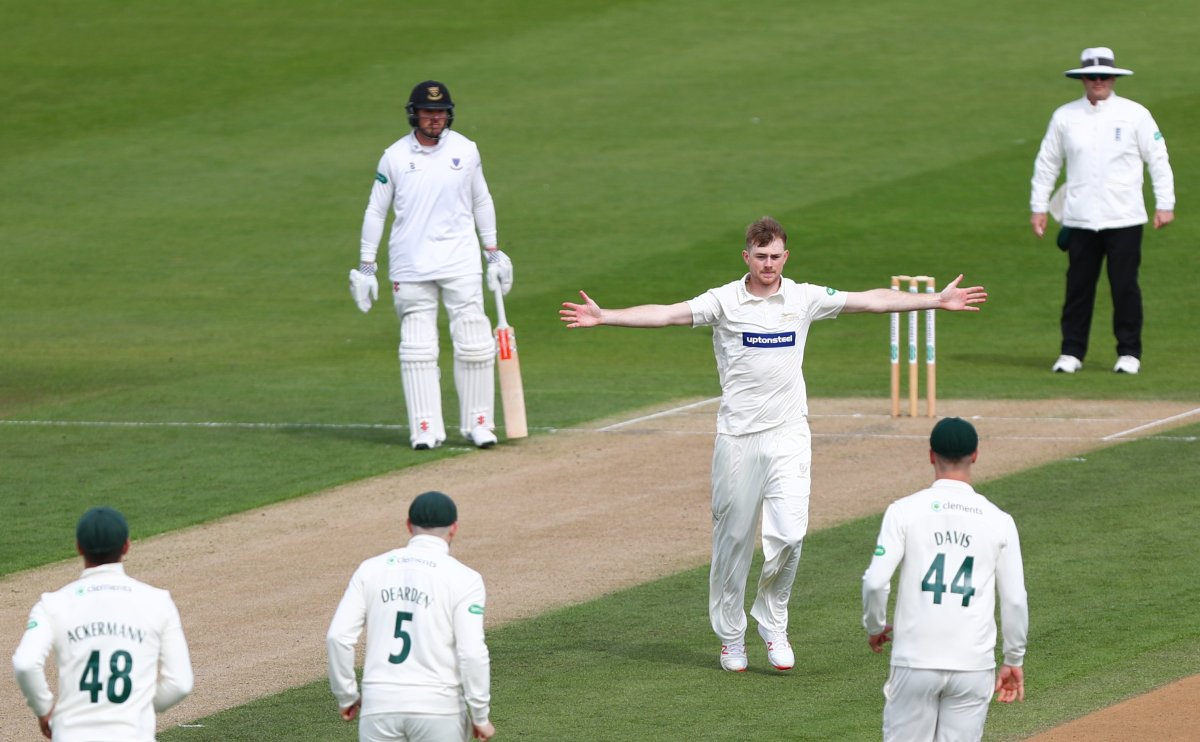 Until Colin Ackermann’s scathing cut towards Hove’s third man rope sealed a rather straightforward seven wicket victory at 2:30pm on April 8th, one would have needed to hark back close to two decades for Leicestershire’s last spoils in a County Championship jaunt to Sussex. Following up a maiden first-class ton from 23-year-old sprog Darren Stevens, the limelight of that 1999 Arundel fixture fell firmly upon one Matthew Brimson, whose 9 for 120 dwarfed the two other five-wicket hauls his orthodox spin had delivered a month apart against Kent and Sussex three summers prior. Should that name ring any bells, it will most likely be thanks to the surreptitious appearance of his penis on page 657 of the next year’s Wisden – probably not the only reason his county days lasted just six further outings, but nevertheless a perplexing act of self-sabotage that Paul Nixon’s squad would do wisely not to replicate.

Ackermann’s spot at the crease to secure victory was fitting, having earlier used his part-time off-spin for a career-best 5 for 69 – his first five-for in 190 attempts at the professional level. Having gone unbowled first time round, his token over to accelerate forward the second day’s tea interval achieved what 20 from four pace colleagues hadn’t, ending the opening stand of 105 between Tom Haines (39) and an ever belligerent Phil Salt, who slashed 11 boundaries in his 67-ball 80. His dismissal was the perhaps the finest of Ackermann’s crop, with the ball jutting in sharply off a length to force him either to stand still and take his own shot in the gonads or back away and prod it meekly into the bowler’s own mitts, though Hasan Azad’s gymnastics at short leg to catch Chris Jordan and Ollie Robinson within three deliveries on the eve of the new ball the next morning would likely beg to differ.

The hosts had earlier found themselves five down for 36 under an hour into the season, with Salt’s charge a welcome reparation for the indignity that was feathering Chris Wright behind to nab a duck right on the stroke of 11am. Tom Taylor had then run rampant, quelling any lingering doubt around Paul Horton’s decision not to contest the toss under uncharacteristically fine April skies. Upon bowling skipper Ben Brown first ball, the one-time Derbyshire man was on a hat-trick with figures reading 6.1-2-12-4, and by mid-afternoon that too became a career best with the additions of David Wiese and Ollie Robinson’s off and middle stumps respectively.

Wiese had reached 51 by that stage, following up his counter-attacking 139 against Cardiff MCCU five days prior with more of the same before driving past another fine Taylor ball that nipped in. Driving expansively through the offside had worked relative wonders as the score almost tripled in just 10 overs of Wiese joining Stiaan van Zyl, who was marking his first Championship innings after 10 months sidelined with a bruised kneecap, but momentum slipped once again after van Zyl pulled Leicestershire’s winter signing Wright down onto his wicket shortly before lunch.

For the third successive summer, IPL calls from their seam stocks have lured Sussex into short-term overseas reinforcement. This time, that comes in the shape of one-test Pakistan left-armer Mir Hamza, who makes up for his lack of name recognition with mighty swing and a stellar record of 282 wickets at 18.37. Catching the Ateeq Javid nudge back to his right-hand side made that 283 before six overs were out, and by the time he’d called an early tea with one that outfoxed a visibly irked Mark Cosgrove by swaying deceptively in from leg, Leicestershire were well on their way to a Sussex-like 59 for 5.

After surviving an early Hamza appeal, Lewis Hill ably stabilised proceedings with consecutive partnerships of 92 and 52 with Harry Dearden and Taylor respectively, facing one more ball than his top five combined as he built a gentle 67 across either side of the light-enforced close of play. Danny Briggs earned his reward after warming up for what seemed like the first 55 overs as Hill swept hard over a full ball that skittled his off stump, but not before Hill had played the same shot somewhat more successfully to bring up a coveted April batting point. That was joined by a second in the final over before a belated lunch as Wright and a twitchy Will Davis put on 31 for the final stand, eventually broken six balls (and no runs) later as Ollie Robinson topped off a typically understated collection of 4 for 46.

The second day proved to be the peak for Sussex, as their overnight 211 for 2 was followed up by another six wicket session, with van Zyl at least waiting one ball longer than Salt had before giving Hill and umpire Jeff Evans their first actions of the morning. Taylor soon sent a middle pole cartwheeling from behind Luke Wells and had a quacking Wiese trapped in front in overs either side of Ackermann’s continuing plunder running into Brown, who claimed the first pair of noughts in his decade-plus at the first-class level when a turner came into his back pad. Once Taylor had picked off Briggs to claim his tenth of the game with the last ball of his second-priciest over, Wright took all of one ball to seal the hosts’ fate and set his side an eminently chaseable 230 in a day and a half.

That equation morphed into 131 on the final day after an evening washout with Leicestershire only a Javid down, and with it kept looking firmly in the visitors’ favour as none of Horton, Azad, Cosgrove, or Ackermann appeared keen to rush things along amidst the most pleasant conditions of the game. After two rejected appeals, two more wickets came for the economic Robinson through edges to Salt in the slips, though Horton’s ended up deflecting off his hands to be taken by Jordan instead. Eight overs apiece from Briggs and Wells were nowhere near as fruitful for spin as the pitch had suggested via Ackermann the night before. Likewise, 24 split between sub-par displays of Hamza and Jordan conceded 110 runs, as steadier heads ultimately prevailed in an enthralling display that left Leicestershire sitting atop the Division 2 table.

How does 30/3 turn into a formidable score? For England, the question lingers, as a malfunctioning top order again failed to appear as the hosts crumbled to 103 all out in pursuit of 509 today at Lord’s. In Horsham, however, a similarly mediocre start turned into a golden position for Nottinghamshire thanks to an unbeaten 163 from James Taylor.

Taylor, who has long flirted with the fringes of the national side but remains a veteran of only two tests, could not have found a more timely century. Though not without its chances, which included a pair of LBW appeals that took him off his feet either side of reaching his first century of the summer, Sussex failed to control Taylor, who reached three figures from 190 balls and continued to push on, gaining in flair and carefully accelerating. The shot that brought up his 150 was a microcosm of the day’s luck, as a prod to mid-off for a single ended up rolling to the boundary for 5 and a chorus of applause from the Nottinghamshire squad, under the watchful eyes of England selector Mick Newell and exiled coach Peter Moores.

He found support in a pair of century stands with wicketkeepers, with Riki Wessels’ departure for a punchy 94 to be Ollie Robinson’s third victim soon bringing Chris Read to the crease. By this stage, Taylor found himself settled on 50, and this allowed Read to make a slow yet untroubled start. He eventually reached his 50 from 117 balls, adding just one more run before stumps. Though Ed Joyce let a tough opportunity off Read’s edge fall on 35, Sussex can take solace in their drastic improvement in fielding from a comedy of errors in Friday’s T20 loss to Hampshire.

The third option with the gloves, Taylor’s Zimbabwean namesake Brendan, was not so fortunate. As the visitors appeared lukewarm to the initial character of the pitch, he fell for 7 from 37 balls to provide an early reward to Matt Hobden, who went on to concede over 100 in his 17 overs. Before him, Alex Hales had become the first to fall off the bowling of Ollie Robinson, providing an edge to Chris Nash at second slip on 3.

Like Hales, Steven Mullaney played a strong hand on Nottinghamshire’s last trip to West Sussex, and for a few balls it looked as if his destructive mindset was the same. Ultimately his innings proved more concise, ending on 15 in the plentiful mitts of Luke Wells for Robinson’s second, but not before he all-out decapitated a rare empty seat with a swipe over the midwicket boundary. Hope later emerged out of the escalating scorecard for Sussex as Samit Patel succumbed to Robinson for 9 to chase Wessels back under the pagoda, followed by a tightening of the screw from Robinson and Magoffin, though Read, once under way, helped Taylor into a comfortable position at the close.

The home side, who were spun to an incredible victory against Warwickshire here last summer by Kentish loanee James Tredwell, found their ongoing spin conundrum remaining one of the many concerns. Wells, an opening batsman by trade whose dabbling in spin has recently begun to resemble treading water, was the first trusted with the ball – ending up with 21 overs under his belt, third only to Robinson and the typically miserly Magoffin – before trialist Peter Burgoyne, formerly of Derbyshire, was unleashed to bowl at 5.7 per over. Both finished wicketless at stumps.

Ashar Zaidi and Will Beer, the only specialist spinners in the contracted squad, observed from the boundary, doubtless pondering how else they can win the red-ball affections of Mark Robinson. Just two games ago Zaidi was one of four centurions at Edgbaston in a motorway duel, while Beer has been granted just 6 appearances in the Championship side since his debut in 2008, despite his white ball prowess. In a town he calls his home, at a ground where his mother acts as a purveyor of baked goodness, murmurings were rife that Sussex could do far worse than give him a chance.